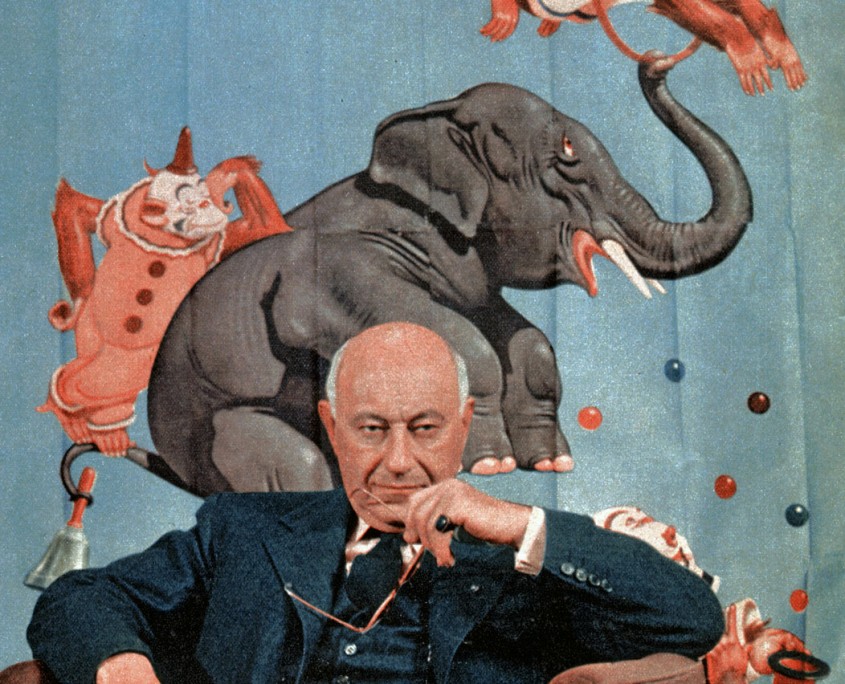 A John Florea portrait of Cecil B. DeMille for The Greatest Show on Earth 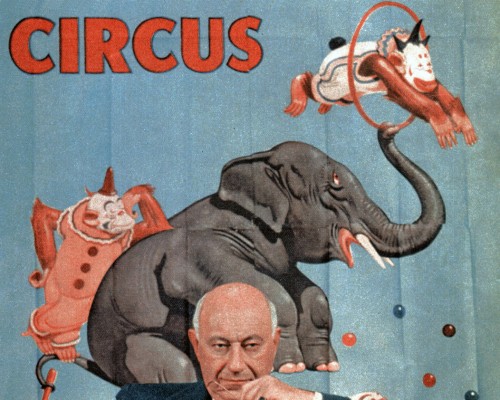 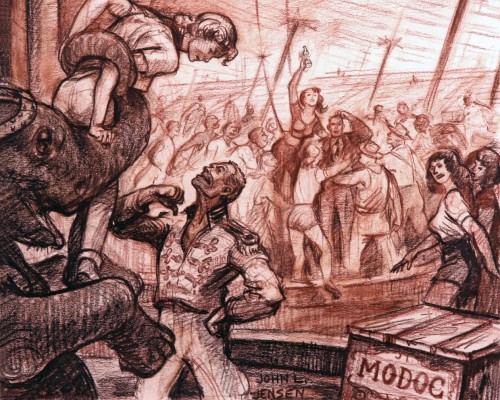 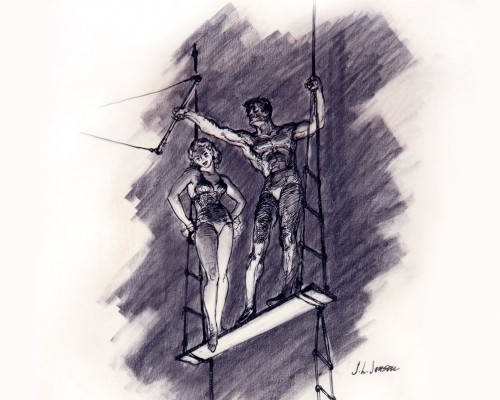 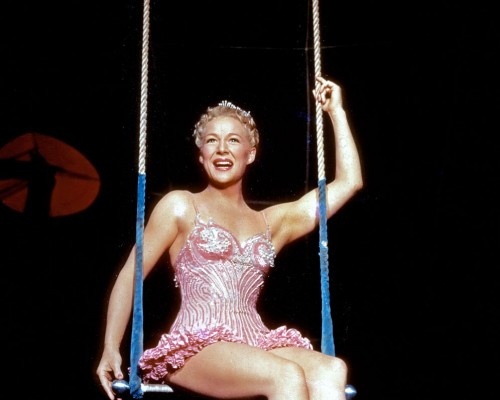 A circus boss must mount a three-ring show in spite of squabbling stars, wild animals, and a train wreck.

“Paramount will hit its greatest production stride since the war in the first two months of 1951, with seven films slated to go before the cameras in a sixty-day period. The biggest budgeter for the company will be the Cecil B. DeMille spectacle The Greatest Show on Earth, which rolls January 22 in Sarasota, Florida. The budget on this one is reported in the $2 million bracket, and the shooting schedule has been set at six months. With Metro-Goldwyn-Mayer’s Quo Vadis and Twentieth’s David and Bathsheba, this DeMille spectacle outstrips anything else on the Hollywood horizon.”

“Cecil B. DeMille is obviously enraptured by all the tinselled glamour, awed by the feats of daring, impressed by the sense of danger that lurks everywhere in circus life. And all of this he has captured with his unrivaled sense of what will make a good movie. Here he doesn’t have to pretend an historical accuracy or assume a religious sententiousness. Here, against the background of a circus, all the faults that caused such critical mutterings about Samson and Delilah are converted into positive virtues. Here it’s right for DeMille to be vulgar, obvious, gaudy. For what else is a circus? In this film any other approach would produce the same pretentiousness that vitiated his earlier epics.”

“Cecil B. DeMille attempts to do for the Ringling Brothers and Barnum & Bailey what he did for God and Moses in The Ten Commandments nearly thirty years ago. Mr. DeMille, who occasionally takes part in the film as an off-screen commentator, makes it clear from the opening frame that the circus created by the Brothers and B. & B. is an awesome affair, and for a while it seems as though the Master is going to do a straight documentary on the subject, to the chagrin of his expensive cast. But presently he gets out of the way and lets the performers go into action.”

“Within his established province of theatrical spectacle, Mr. DeMille has at last achieved a merger of the spectacular with the real. The circus, an actuality, presented Mr. DeMille with a subject that challenged even his skill at representing dazzle on the screen—and he handled it in superior fashion. Indeed, looking back on his career, this film glorification of the circus would appear to be the one far-off divine event to which the whole creation of Cecil B. DeMille has supremely moved.”

“Mr. DeMille explained the whole picture to me thoroughly, dramatically, and clearly. When he finished, I was almost ready to chuck Paramount and join the circus.”

“I was maybe six or seven years old. My father came to tell me, “I’m going to take you to see the greatest show on earth. My father explained that there were going to be lion tamers and circus acts, clowns and trapeze artists. And we walked into a dimly lit room. It felt like a place of worship, a synagogue. I still didn’t understand about the “greatest show on earth.” There were seats, not bleachers, all facing forward. There was a large red curtain. It opened and there was an image. And I realized that my father had not taken me to the circus, but to a movie about a circus—the first movie I had ever seen, Cecil B. DeMille’s The Greatest Show on Earth. The feeling of disappointment lasted about ten minutes, and then I was a victim of the drug called cinema. I was no longer in this church. I became part of an experience.”

The Greatest Show on Earth cost $3,873,946.50 and grossed $15,797,396.36, with a net profit of $6,615,903.31.
(These figures have not been adjusted for inflation nor do they include the considerable profits realized from reissues, television syndication, and home entertainment formats.)

The Ten Commandments
Scroll to top